Energy seasons in the Chinese calendar 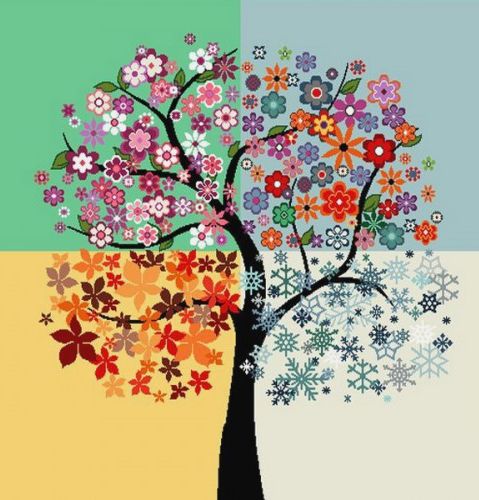 Today’s the 5th of June 2021 and, energetically speaking, we’re in Summer.
‘Whaaaaaaaaaat?’, you may say.
And yet this is true: not only ‘Chinese’ energy seasons differ from those seasons we take for granted in our culture, but they also number not four but five seasons.
The difference comes first from the fact the Chinese calendar isn’t a sun calendar but a lunar-solar one, that is to say it takes into equal account the movements of the sun and the moon, and its months last between 29 and 30 days.

The Red and the Black

Second, the way this calendar unfolds is based on the observation of nature and on the constant inseparable movement of Yin-Yang. Yin relates to the feminine principle, darkening, getting colder, flexibility, slowing down, growing still, intuition, densification, potentiality. Yang relates to the masculine principle, getting brighter, getting warmer, logic, firmness, the non-physical, action in the usual sense of the term.
Yin-Yang are not opposite and none is better than the other, they are vital complements. In fact, more than vital complements, they are two aspects of one single life movement. You can’t experience day if you don’t experience night, ground and seeds need latency to manifest their creation potential. From Yin, Yang develops, turns into Yin which gives birth to Yang etc. Furthermore, nothing we may experience is purely Yin or purely Yang, this is what this famous symbol represents. 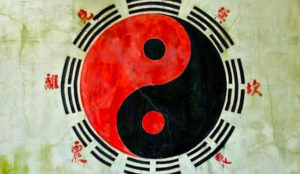 A calendar based on the observation of nature

This Yin and Yang dance is complemented by the observation of natural cycles. In Spring, insects wake up, then plants bud and sprout from earth to sky: this expresses the beginning of a Yang movement. The season when we witness these phenomena is thus at the beginning of the Yang movement of seasons; it generally happens during the first week of February.
If one sees this as the starting point designated by nature, then solstices and equinoxes of the sun calendar are not the start of energetic seasons but their apex, the time when seasonal energies are at their peak.

The four seasons… plus one

From this endless movement which gives birth to the vital momentum, the five seasonal energy movements arise: those of the 4 seasons Spring, Summer, Fall/Autumn and Winter, with as a special bonus: transition times. 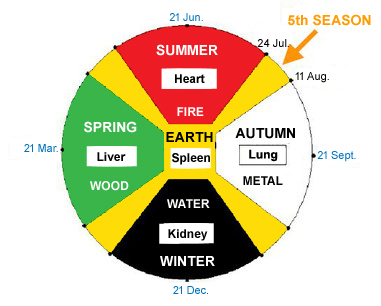 Because everything is movement, the times of passage or transformation are not secondary and have a full part in Chinese energetics. Seasons do not brutally change; change occurs during transition periods where the energy gradually goes back to Earth, which accommodates and transmutes everything, before gradually turning into the energy of another season. These seasonal transitions last approximately 18 days, and are called the Fifth Season.

One of them is special because it occurs between Summer and Fall/Autumn and hosts the switching of polarity from Yang to Yin.

Finally, energetic seasons are as follows:

Transition roughly between 27 April and 12 May

Fifth Season, roughly astride the last week of July and the first ten days of August, energetic polarity shifts from Yang to Yin. Like all transition periods, it is the Center, associated with colors Yellow to Ochre, the Earth element and the energetic organ Spleen

Transition roughly between 30 October and 15 November